"Strength from a butterfly and the hoot of an owl."

I got on the trail at 5:15. There was just enough light to see. It was really warm, too, probably in the 70's. I wasn't feeling very well and might have had a slight fever.  I felt clammy and hot.

Fortunately the first few miles headed downhill. When it came to heading uphill, however, I felt really weak. That's when it happened. I know people are going to say Bobaroo has lost his mind, but I'll tell it anyway. All of a sudden a white butterfly flew in front of me up the trail and at the same time an owl began hooting in the forest. Then I swear I heard a whisper in my head, "Strength from a butterfly and the hoot of an owl." From that moment on, it was as if I was re-energized. I no longer felt clammy or weak. I can't explain it, but that's exactly what happened. Perhaps I am losing my mind! If so, it made the day very enjoyable!

By mid morning I climbed to Jefferson Park, a large meadow with regulated camp sites. It is regulated due to overuse, and campers can only camp in specific areas. There are also fabulous views of the north side of Mount Jefferson, which has several large glaciers. Beyond Jefferson Park, the trail climbed steeply to the top of a ridge where I got my first view of Mount Hood. If my head wasn't in the way, you could see it too! 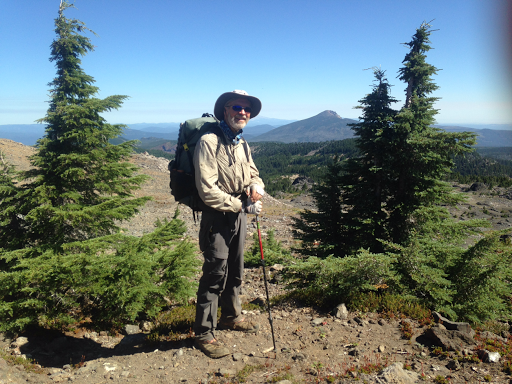 I found out that there is a small store on Olallie lake at the Olallie Lake Resort. The resort is very near the trail. I hurried all afternoon and arrived at 2:30. 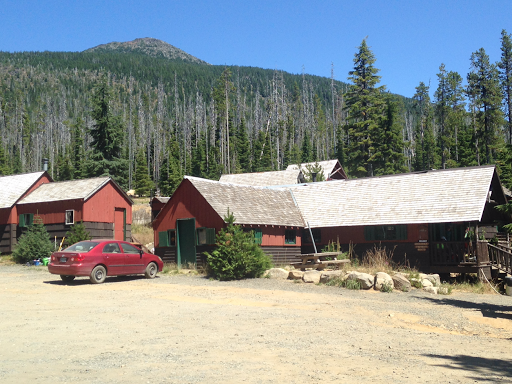 I bought and enjoyed a couple of cold beers and a Pepsi. They also had canister fuel, so I bought one because I might run out before getting to Timberline Lodge. I found out that the temperature today was above 90, so it had been sweaty hiking all afternoon.

I decided to hike a few more miles and camped at Jude lake. It was so warm that I decided to take a swim. The lake bottom was really muddy and I churned it up as I paddled around. It sure felt good, but I hope I don't get swimmers itch!