As I crested the ridge, all I could see was a towering plume of smoke. Not just one, but three separate fires were burning somewhere to the north. 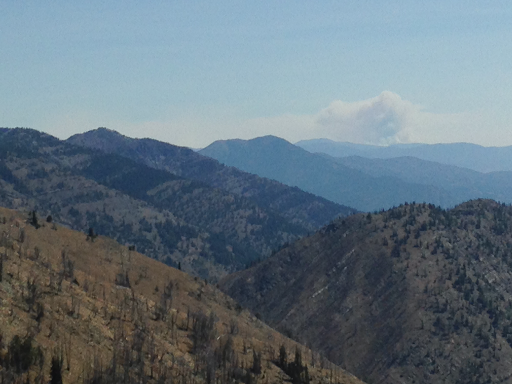 My mind wrestled with the thought of a trail closure. Not now; not on my hike! Not when I am this close to the end!

The morning began with birds chirping in the woods. I hadn't heard them for quite some time. It made me smile.

I was packed and hiking by 6 and knew this would be a challenging day. After a short climb to Methow Pass, the trail descended to the valley and crossed the Methow River. It followed the river for several miles before climbing 2,700 feet back to the ridge again. I counted over 30 switchbacks!

When I got to the top is when I noticed the smoke plumes. I checked to see if I had phone service. I didn't. It is so frustrating not to be able to get information when on the trail. I was resigned to continue on to Harts Pass where there is a ranger station. I figured that if there was a new trail closure I would find out there.

The views of the mountains continue to be exceptional. 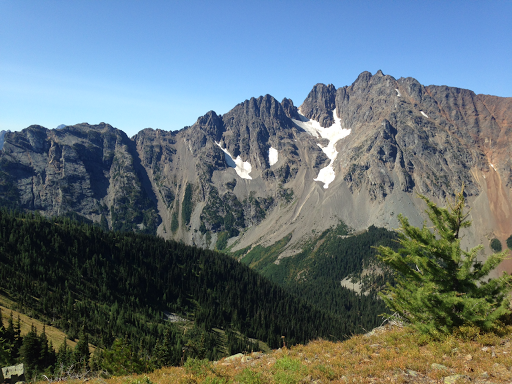 When I was almost to Harts Pass, I met a couple of ladies who were section hiking, headed to Canada. They mentioned that they had met "More Cowbell"!  I had hiked with him for several days in Southern California. However, since he is ahead of me by several hours, it is unlikely I would see him on the trail. He has a very fast pace.

The ladies had run out of water and were hoping to find some at Harts Pass. I told them that I didn't think there was water there, but I could share a liter with them. As I suspected, there was no water there. Fortunately, there was a little creek just a half mile up the trail. I filled up and carried an extra two liters for cooking tonight.

As the afternoon wore on, the sky filled with smoke. I don't know if it was from the fires I spotted or from the Lake Chelan fires. In any case, the smoke was so thick I could barely see the ridges above me. The sun looked like a big red ball. There were even little flakes of soot falling like snow!

I started looking for a campsite at 3, but as fate would have it, the trail followed the hillsides for many miles. I passed a sign that said I was entering the Pasayten Wilderness. A short time later I finally found a good campsite near a small stream.