Yesterday I ended my blog with a list of things I was worried about. Lets see what transpired.

Will both my boxes be at the post office? Yes, both were there. I got there just as they opened. Everyone was interested in my hike and had a lot of questions.

Will I find enough snacks for the next five days? Yes. I only had to buy three Snickers bars.

Will my feet feel OK? Not really. The blisters are still tender. The one on my right foot is in a place where occasionally a rock will push against it. Hiking for 9.5 hours left me with tired feet!

I was feeling really anxious to get going this morning. When I went to put on one of my gaiters, I noticed the metal clip was missing. The clip slips under the shoelace to hold the gaiter in place. I suspected that it came off when I was doing laundry. So, on my way to breakfast, I stopped by the laundromat. I found it! Now I have a new sewing project.

After picking up my resupply boxes, I walked back to the motel and sorted out my meals and snacks. I have five days of food to get me to Etna, my next resupply town. I also put together a hiker box. When checking out, I asked Eric, the manager, if it was possible to get a ride back to the trail. He said "Sure!"  I paid him $5 for gas and arrived at the trail at 10.

After heading up the wrong trail at the start, I got back to the correct trail and was on my way. Water is a potential problem on this section so I checked for reliable sources. Just after Indian Springs the next reliable source is 24 miles! When I reached Indian Springs, there was a sign saying "Don't Drink the Water". There had been a fire here and they used a fire suppression agent that had gotten into the water. Fortunately there was another stream just up the trail!

A short time later, I got to a four-way trail junction, but didn't see a sign for the PCT. However, the trail heading up the mountain looked heavily used, and since I knew there was a big climb, up I went. There were a lot of people on the trail, and having "trail" legs, I was passing them fairly quickly. There were some great views of the Castle Crags. 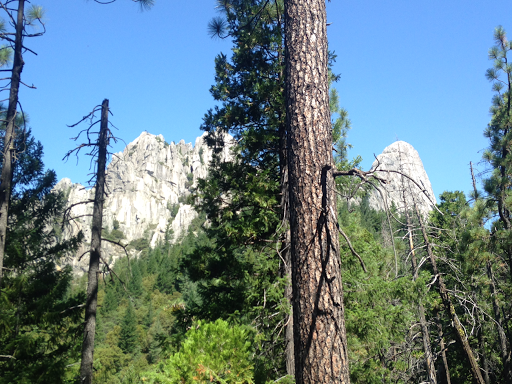 After going up rather steeply for a mile, the trail came to a junction. Neither of the trails were the PCT. I pulled out my phone and checked my GPS location on the map. I was nowhere near the trail! I had made a bad decision a mile back! I felt so foolish! So, down I went. The PCT was poorly marked, and I had wasted an hour on the wrong trail.

I planned to hike until 6:30 which would have given me nearly 20 miles for the day. I now needed to hike for another hour! 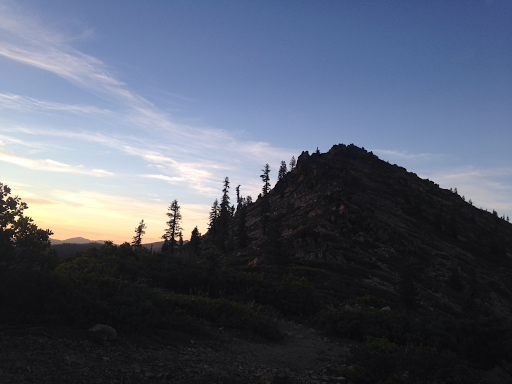