Ulrich Cabin to Snoqualmie Pass on the Pacific Crest Trail

The cabin at Camp Ulrich near the Government Meadows is located about 20 miles east of the town of Greenwater, Washington. The cabin is a common rest stop for Pacific Crest Trail (PCT) through hikers, especially in the fall, when Washington rains and storms and bring nasty wet weather onto the trail. The cabin is a welcome venue to escape from the weather.

The cabin was built to commemorate the life of Mike Ulrich, a forester who died in 1957. There is a plaque which reads,

The mountain Gods from seat on high,
Rejoiced to see Mike Ulrich die.
And at his death gave this decree:
"to all who pass here, know that we entrust to big Mike Ulrich's hands these camps, these trails,
these forest lands: to rule, protect, to love and scan as he did while mortal man;
And deal out sentence stern and just on those who violate his trust."
Stranger, beware, leave not a fire
Foul not Mike's camp,
Rouse not his ire!"

My wife was most gracious, and agreed to drive me on Forest Service road 70 (just beyond Greenwater) to the horse camp near the Ulrich cabin. The road is paved for nine miles, and then is a good gravel road to the turn-around / parking lot. There is a trail from the parking lot that leads to the Pacific Crest Trail.

I arrived at 4 PM and made it to the cabin by 4:45.
From the cabin, the trail passes through dense forest to the spot where settlers from the first wagon train using the Naches Trail stopped to camp in 1853. They were headed across the Cascade Mountains to settle in Western Washington. The wagon train consisted of more then 30 wagons. They camped at this spot, resting their oxen, who feasted on the abundant grass and good water supply.
The PCT then winds through the forest and crosses several dirt roads, used for logging. I noticed a truck camper parked half-way up on a hill in the distance, and wondered if perhaps hunters were using that sight to spot elk. I was hoping my attire didn't appear to be elk-like from that distance!

I was surprised when the trail came up to the truck camper that I had seen earlier from the trail.

A lady yelled out the window, "Hey, are you a through hiker?"
I chuckled, and said, "No, but I'm in practice for next year. Does that count?"

An older gentleman then came out and said, "Would you like a beverage or something to eat?"
I had read that PCT through hikers should always reply, "Yes, thank you". So I did.

The couple were through hiker "trail angels".
They are people who camp out along the trail and offer food and comfort to the hikers.
The fellows name was Mike (I think, my memory is a bit fuzzy here) and his wife was named Martha.

I parked my pack and settled back in a soft chair, enjoying a banana and a cold lemonade.

Mike had worked for Weyerhaeuser and knew all of the logging roads in the area. This site was perfect. The view of Mount Rainier was fabulous and there was good cell service.

We chatted for a half hour and I listened to their stories about through hikers. They even hosted "Half Mile", who was walking the trail to map it with his latest GPS equipment.

When I left, I signed their trail register.
Now "Bobaroo", my trail name, is officially in the public record.
I also took their picture:

I headed up the trail and made it to my planned camp site by 6:30.
As a bonus, there was a nearby spring with a good flow of water.
In the morning, there was a beautiful red sunrise, but it was chilly. I had to wear my jacket for the first hour or so. There were amazing views of Mount Rainier, reflecting the morning sunlight.
I came over a hill and was astounded by the forest of dead trees. They had all died from a 3000 acre fire to which a scout group erected a sign.

I hiked on for several hours and was a bit concerned about water. This section of trail goes for about 11 miles without a reliable source of water.

I did, however, find a cache left for through hikers.
Cans of Beer!
Realizing that there were very few hikers still on the trail, I took one to enjoy at dinner.
Often there would be views to the hills in the distance.
Autumn has really arrived in the high country.
I almost walked by a "reliable source" of water, except that I noticed a man and woman sitting in a meadow as they cooked their lunch and dried their sleeping bags.

The man turned out to be an avid through hiker who had hiked the PCT three times and both the Continental Divide Trail and the Appalachian Trail!

He gave me some tips, including:
1) Start the PCT hike early - either late March or the first week in April.
2) Go SLOWLY for the first month or so. Most new to hiking get hurt by trying to go too far too soon.
3) By going slowly you won't get to the Sierras too soon. It's 700 miles away.
4) Buy your food along the way where possible. Most towns have a great supply of food, and sending food by mail is expensive.
5) Keep in touch with other hikers on the trail. They can offer advice and help to make the journey much easier.

He typically did not treat his drinking water, but did carry a filter.
He also had been foraging for mushrooms and had found some "Chicken of the Woods". It is easy to identify, and adds a meaty flavor to the meal. He gave me some to add to my dinner.
This is what they look like in the wild. Note: it's not my picture. 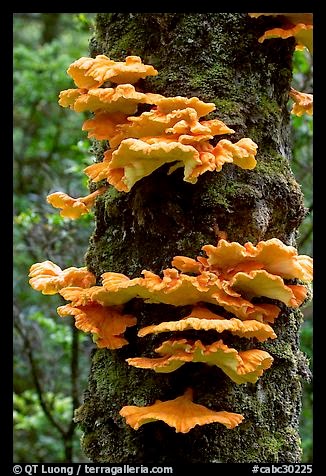 Unfortunately, I did not get a picture of Freebird or Raven, but will visit his blog on Trailjournals.com.

Needless to say, I ate a hurried dinner and went to bed just as the sun was setting.
I was exhausted but thrilled with a long day on the trail.
The next day, I awoke and broke camp just as it was getting light.

The trail wandered through dense forest and often broke out into pretty meadows.
There were hundreds of mushrooms along the trail.
It was almost unbelievable, like something taken from a children's book.

There were Amanita muscaria, those bright red mushrooms which are poisonous.
There were "hedgehog"mushrooms, many different kinds of coral, Boletus edulus (Porcini), Hericium erinaceus, a tooth fungus, also called "lion's mane", Oyster mushrooms, and one of my favorite, the Cauliflower mushroom (Sparassis). 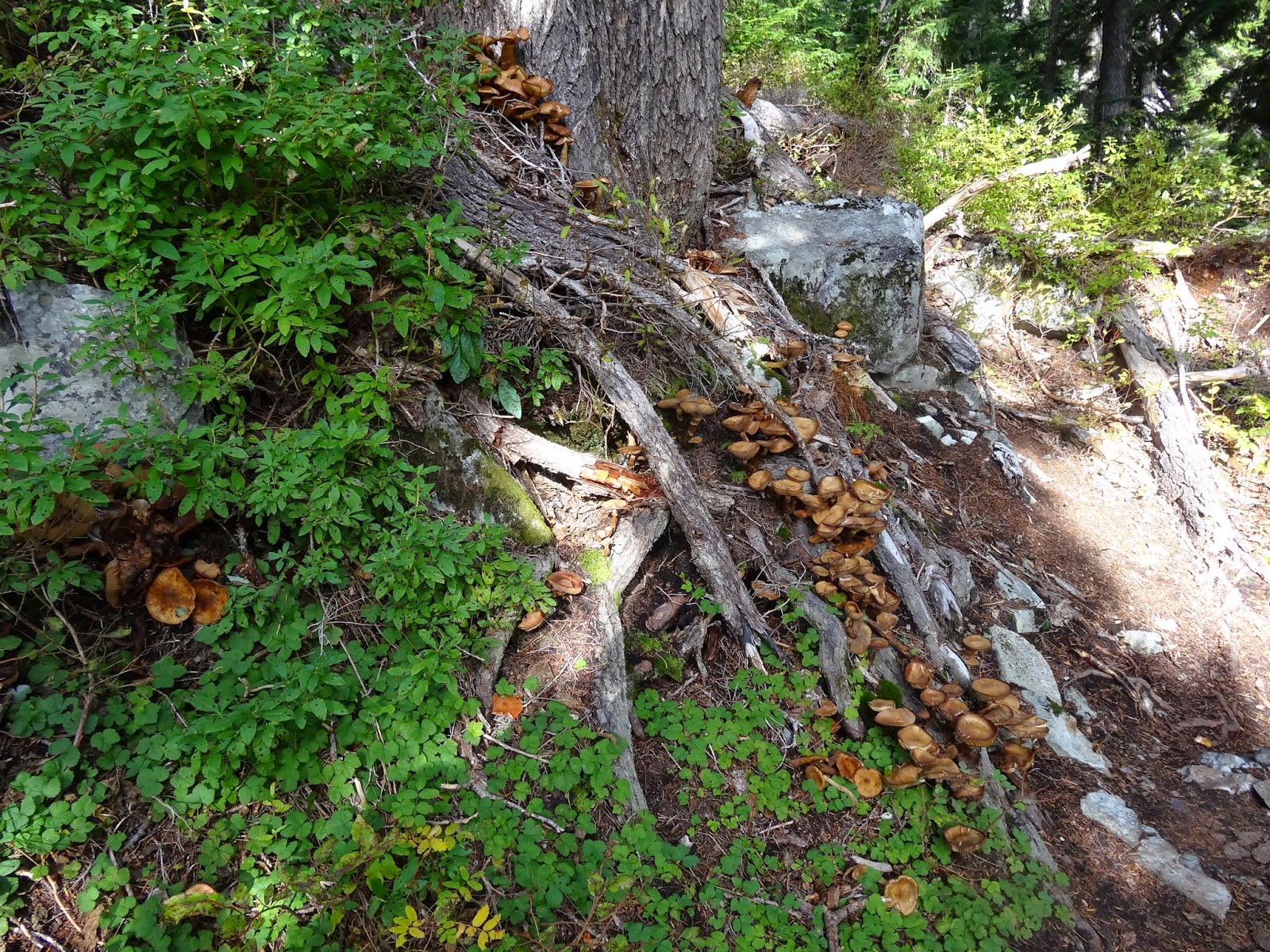 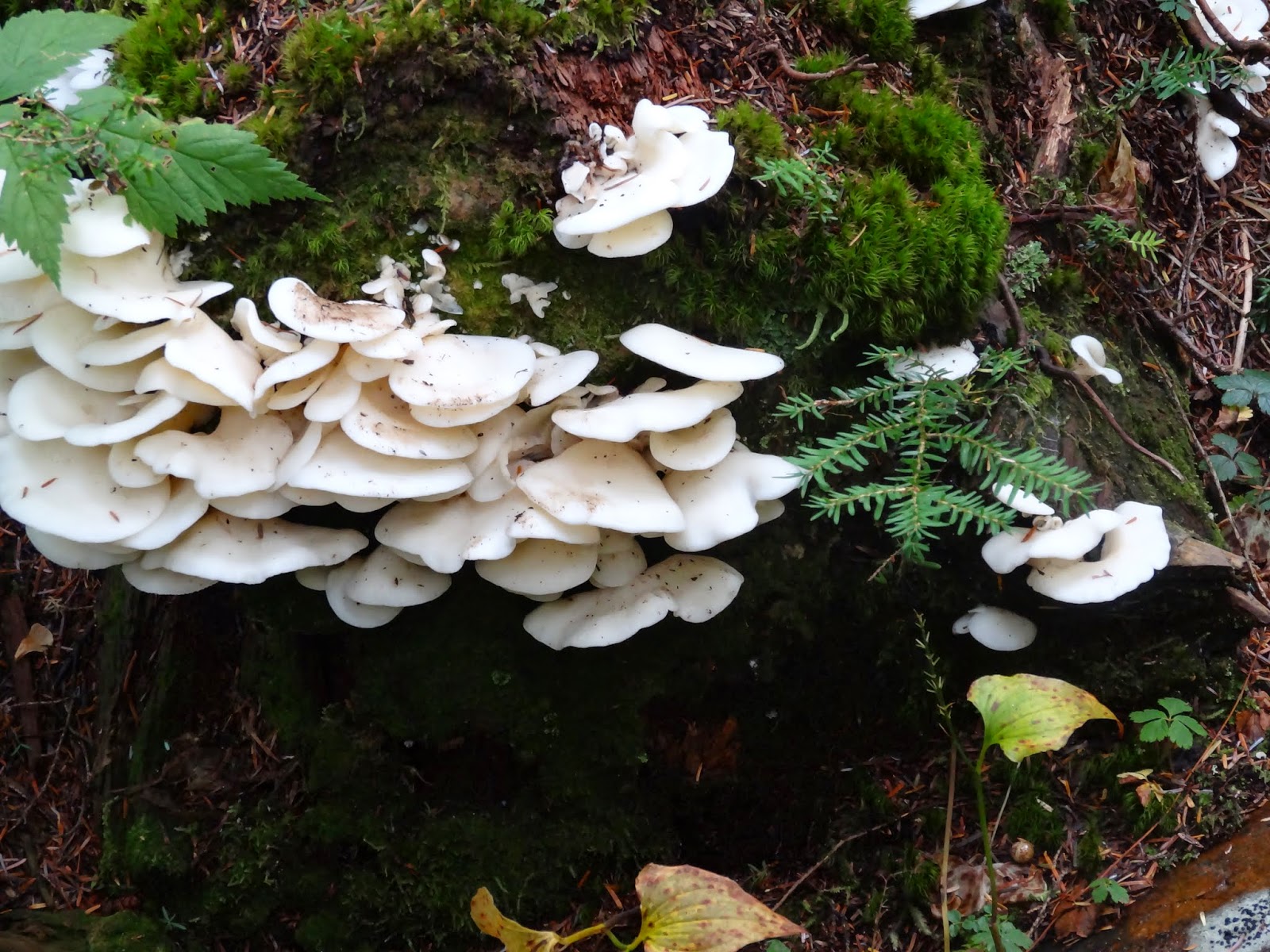 This portion of the trail had much more frequent sources for water. In fact, there was almost too much water. Several times the stream was running down the trail. There were several areas with pretty ponds.
The PCT comes right next to the edge of the Cedar River Watershed. I had to chuckle, because about every twenty feet was another sign announcing that it was illegal to enter the watershed.

One of the few climbs on the trail ended up at Mirror Lake. It was nestled between tall peaks and would be a good camping destination from Snoqualmie Pass or Stampede Pass.
By noon I was within five miles of my destination, Snoqualmie Pass. I had told my wife that I would meet her between four and five, thinking that I might take that long if there was a lot of elevation gain. Since the trail had been fairly easy, I called her to say I would be at the pass by 2 PM.

However, I kept my promise by taking her whistle with me, so she had to keep hers and pick me up.

I was amazed at how noisy the freeway is from the trail above. It was almost a low roar.
This is the first view of the freeway from the trail.
The last two miles of the trail continue through dense forest and pass several lakes. There were many hikers headed to Lodge lake.

I finally caught sight of Snoqualmie Pass and could imagine how excited through hikers are to see a place to stay and "real" food.
What did I learn from this hike:
1) I have proven to myself that I can hike all day, get up the next morning, and do it all again.
2) Physically, the trail is very challenging. I can feel the ache in my leg muscles. I need to keep training to get those muscles in shape.
3) I finally found the right shoes for the trail. I'm wearing Montrail Bajada, size 12.5 (two sizes bigger than my "normal" shoe. No blisters or foot problems this time.
4) Another experienced through hiker suggested buying food along the way during my PCT hike.
5) I used bleach to treat my water (two drops per liter). THAT is going to be my preferred method of treating my water from now on.
6) Still not sure what stove I should use. I like the JetBoil, but the alcohol stove still calls my name.
7) I should consider a slower start to my PCT through hike; that also means an earlier start.
8) I didn't need a whistle the entire trip. However, it was worth the ride home!

I have now officially completed an entire SECTION of the PCT.
Section "I" runs from White Pass in the south, to Snoqualmie Pass in the north, almost 100 miles!