After last nights thunderstorm, I expected the tent to be wet. It wasn't. I guess there was enough of a breeze to dry it out.

I was on the trail at 5:50. Although my tent had dried during the night, the plants along the trail were ready and waiting with their load of water! For the first four miles I waded through bushes. I was soaked from my knees down. Even my shoes sloshed with all the water. This is what I was walking through. 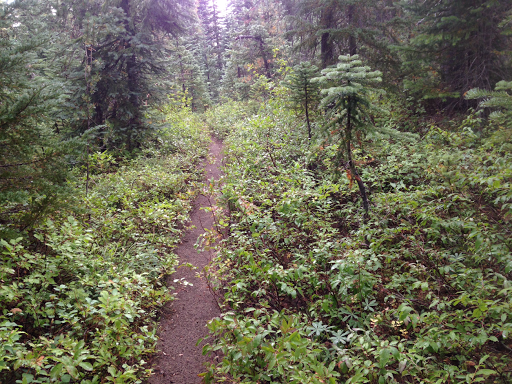 Finally the trail entered the woods and a warm wind slowly dried my clothes.

As I approached the Goat Rocks, there was a beautiful waterfall. 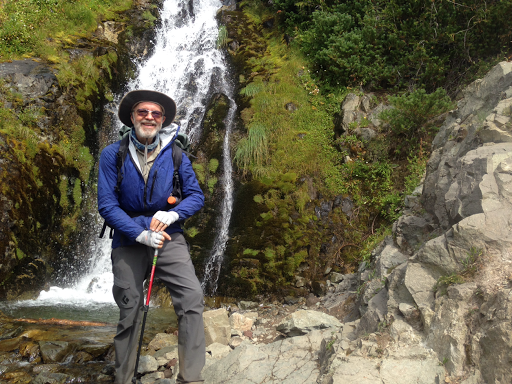 The trail then climbed 1,000 feet to Cispus Pass where I "officially" entered the Goat Rocks. Most of the area is above the tree line.

When I neared the trail to Snowgrass Flats, I noticed a group of people gathered there. When I arrived, a lady asked, "Are you a through-hiker?"  I said I was, and then she asked, "Do you want a beer?"  I smiled and said, "Sure, but do you have one?" She reached into her pack and gave me one! I was amazed! 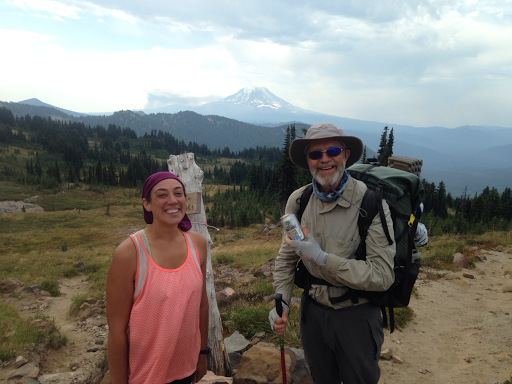 The group of people were members of the Mountaineers. They pointed out that there was a fire burning on the east flank of Mount Adams. You can see the smoke plume in the photo.

I continued up to the "knife edge" and then continued down for several miles. I didn't take many pictures because the smoke cloud covered the sky. Also, I blogged about this last year when I hiked to the Goat Rocks.

I decided to camp near water, so I stopped at Hidden Springs. My legs and feet are really tired. I put the beer in the ice cold spring water, and shared half of it with "No-Tent". It was the perfect ending to a very physicality challenging day!