Last night, two other campers came in after I was in bed. One just before dark, and the other after dark. It is impossible to set up camp without making noise, and the one who arrived after dark made plenty. The result was that I didn't get to sleep until 11. It made for a short night.

I was on the trail at 5:30. The literature says that this portion of the trail is the least interesting because there are very few views. I would have to agree. I saw Mount Hood once, and that was through the trees. Most of the day was spent in mature forests. It's not the greatest picture, but gives a general idea of the trail today. 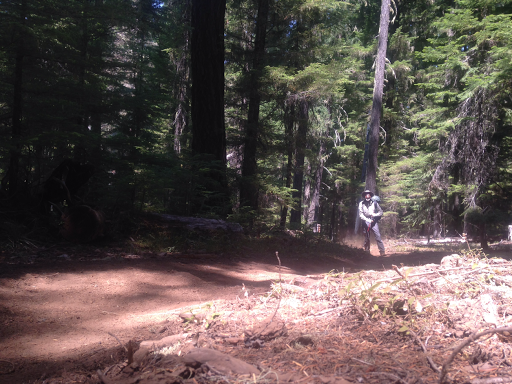 At about 8, I saw an older gentleman coming towards me. He had a bushy beard. I said "Good morning!", and we stopped to chat. He had started at Timberline Lodge, and was headed south for 600 miles. He had a ULA backpack, similar to mine. When I asked him his trail name, he said it was "Billy Goat". 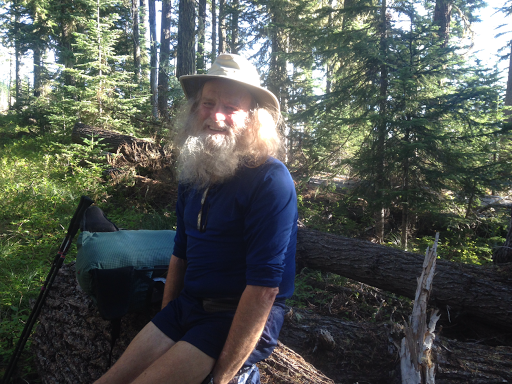 I was astonished! Standing in front of me was one of the legendary hikers of the PCT. Some say he lives on the trail. For certain he has hiked it many times. There even is a cave in Southern California that is called "Billy Goat's cave". We talked about the trail to Timberline Lodge. He said it was in really good shape, except I should be aware that the last mile to the lodge was fairly steep uphill and the trail was deep sand. We also talked about water caches. He is completely against them. They are like litter on the landscape.

I finally said my goodbyes and was so thankful to have met this kind man!

The rest of the day seemed to go quickly. I stopped several times to get water, since the temperature was in the 90's. By 4:30 I filled up with water at the last reliable location until Timberline Lodge. I got 1.5 liters extra because I planned to dry camp.

I had spaghetti and meat sauce together with bacon bits and olive oil. I also drank a liter of water. I finished off the evening with a sit-bath. Ah, I feel better now!