The trail along the Hat Creek Rim is considered one of the hottest sections of the trail. The temperature is 98 degrees today with a slight breeze. There is no water for 30 miles and very little shade. There might be a water cache midway, but we can't count on it.

To compound our problems, Willie came to me last night and said that his hip was really hurting him. If the pain persists in the morning, he was planning to take a day of rest. I needed to decide if I would go without him, or take a day off as well! I thought about it for some time, and decided that I would go on. I've been worried about his hip for some time and had come to the conclusion that i need to hike my own hike. Willie will either keep going or get off the trail to deal with his injury. I can't hike his hike.

We decided to start extra early to beat the daytime heat. My alarm went off at 3:15. Since I was cowboy camped, I packed quickly, put on my headlamp, and went to check on Willie. I was fearful at what I might find. Willie was packed up and ready to go. His hip felt much better! I was relieved.

On the way back to the trail, I missed a turn in the dark and ended up following the Subway Cave loop trail. We ended up right back where we started!  I felt pretty silly, and the second time I checked my digital map and took the correct trail. We were headed north by 4 o'clock.

If you have ever walked in the dark with a flashlight trying to follow a trail you have never been on, you might imagine how difficult it was to keep my footing and stay on the trail. I had no depth perception and felt like I was learning to walk again. Fortunately it was light by 5 and we had no major mishaps in the dark.

Once we were on the rim trail there we views of Lassen and of Shasta. The trail will eventually make a long loop around Mount Shasta. 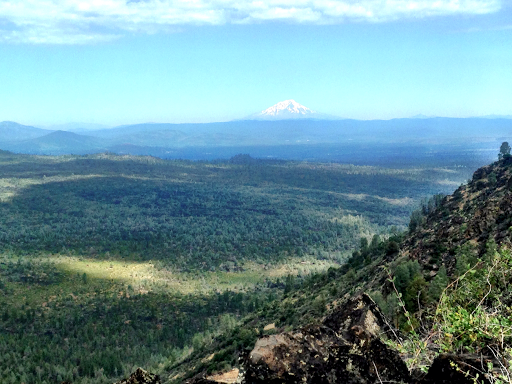 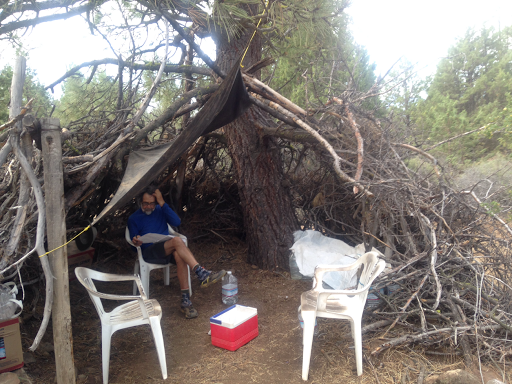 We had not used much water, so we didn't take any. We also decided to hike to the next reliable source of water, a little over 13 miles away.

The hike was "mostly" downhill, but the temperature was quickly climbing. By 1:30, we were so hot that we stopped under a large tree. Willie was leaned up against the tree, and after a while I heard him snoring! I checked the temperature and it was 98 degrees!

Beside the trail, I occasionally saw some really beautiful flowers. Does anyone know what they are? 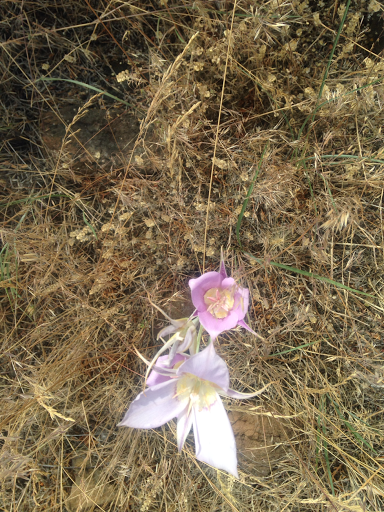 We finally headed down the trail and spent the next two hours in the sweltering heat. We reached water and filled up our water bottles. I drenched my head and soaked my buff.