My work schedule allows me to take off every other Friday, so this week I would have an extra day for an outing. With August weather being clear and warm, what could be better than a bonus day on the Pacific Crest Trail?

My plan was to get home from work, grab my pack, and drive to Chinook Pass, which is about an hour and twenty minutes from my house. I would get on the trail and hike NORTH to Sheep Lake. Depending on how long it took me to get there, I might hike on a bit further.
I got to the trail at 5:30 PM and arrived at the lake at 6:30. Sheep Lake is a popular destination because it is a relatively short hike from Chinook Pass. It is also very beautiful, nestled between tall majestic mountains overlooking the Pacific Crest Trail.

As I walked the trail shore, I noticed a man doing stretching exercises; he appeared to have just set up camp. His trail name was "Mungra", a through hiker who had been walking the PCT from the Mexican border. He had only walked sixteen miles today, saying that he felt like he had been walking uphill the whole way. He also said a lot of through-hikers were already in Washington because the snow was not a problem in the Sierras this year. He has hiked the PCT several times and said he might do it again next year.

Who knows, maybe I'll see him again on the trail?

Since there was a lot of daylight left, I decided to head up the trail to Bear Gap trail. The Bear Gap trail is where I started hiking about two weeks ago, when I headed north. I never did go south from the Bear Gap trail, because I was tired, and I didn't think I had enough time on my last trip.

So, tonight, I headed north again. It ended up being six miles round trip, but I made it back to the lake by 8:30. I had just enough time to set up camp and eat dinner before dark.

As I snuggled in my warm sleeping bag, there was a bright moon lighting my tent. What a fabulous evening of hiking!

In the morning, I awoke at 5 AM and started packing up at 5:30. I didn't get a good sleep last night because there were strong gusts of wind all night. This morning, it is partly overcast, but a break in the clouds let the sun light up the mountain peaks above me. It was beautiful.

My plan for today was to hike SOUTH on the PCT. The elevation chart below shows the trail I traveled. 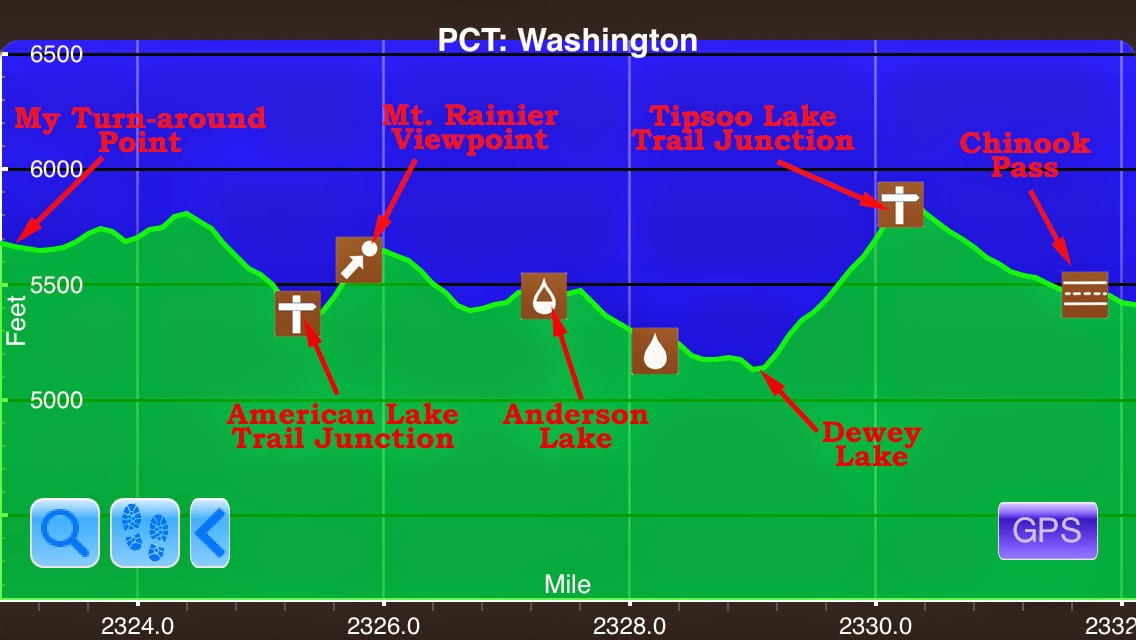 Note: This elevation chart courtesy of Guthook's PCT Hiker app. He has apps for many trails including the CDT and AT.

I got water at Sheep Lake, and then headed south on the trail. The trail follows along highway 410 for about a mile.

I crossed over highway 410 on the log bridge, and then headed up the trail. The wild flowers were amazing. And, there were lots of little sparrows fluttering about, seemingly with no care in the world.

Often I would see several chipmunks chasing each other, using the trail as their highway.

I reached the high point of my walk and could look down in the valley at Dewey Lake. This lake is a rather large lake, which sparkled in the sunlight, its deep blue color ringed by forest. I made a mental note that I would have to climb back up this 800 to 1000 foot  hill on my way back!
The lake was lovely, and there were a couple groups camped there. On the way down, I passed a young couple. The woman had a mosquito net covering her head. I asked, "Lots of bugs down there?" and she replied, "No, I'm just paranoid!" I got a good chuckle out of that!
As I headed further south, I finally came to Anderson Lake, which is nestled in the forest and has several good camp sites. There was only one couple camped there, and it appeared that they were getting ready to hike out.

The trail steadily rises and I came to the trail junction to American Lake. There was a group of young men there, who had apparently hiked up from American Lake. The signage for the PCT is not good at this point. There is nothing identifying the PCT, other than a faint scribble on the sign that was likely added by some through hiker to help others on the trail. I wonder why they don't at least put up some of the PCT trail emblems at such junctures? I checked my Guthook trail map with my GPS to make sure I was still on the right trail. There would be nothing worse than to hike uphill for a mile or two and realize you were on the wrong trail!

The trail continued its steady climb and I was feeling the miles on my legs. At one point, I happened to take my eyes off the trail and look out at the surrounding view. Mount Rainier was awesome! The views were absolutely spectacular!
At about nine miles in, I decided to break for lunch, air out my feet, and change socks. As I was eating a cup of peanut butter, an older gentleman with a cowboy hat comes walking out of the woods and onto the trail. He asked me if I had seen two kids, one carrying an orange backpack. When I asked how old the kids were, he remarked, "they're in their mid 40's"! He had apparently hiked ahead this morning, complaining about being cold. But, in the sun, he decided to hike off trail and take a nap! He said he left his hiking pole in a tree branch beside the trail, so his "kids" would know he was there. I thought to myself, "I didn't see your black hiking pole, why would you think they would?" Anyway, I hadn't seen his companions, but told him I would let them know where he was if I did. As it turned out, I met them about twenty minutes down the trail. The backpack he described was red, not orange.

As I headed back, I met more an more hikers. This is a popular hike, and now I know why. The views are priceless, and starting the trail at the pass makes it easy to enjoy the trail.

I got back to Chinook Pass at 3 PM. I figured that I hiked over twenty miles today.

I headed back toward home, but stopped for dinner at the Black Diamond Pizza and Deli.