Sleeping in while on the trail is a luxury. It was 6:30 before I got out of my sleeping bag and headed down to the general store for their all you can eat pancake breakfast. The store owner has an outdoor gas stove where he cooked three pancakes at a time. He served coffee with breakfast as well. 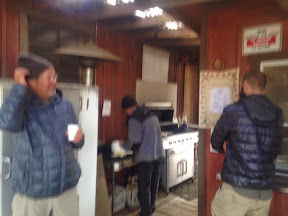 Out behind the store is where everyone camps. There is a giant teepee marking the entrance to the campground area. 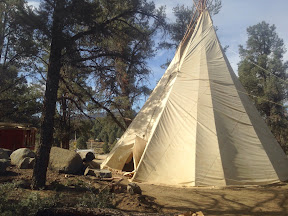 I suppose several people could camp inside if they wanted to.

My task for today was to figure out exactly how many days of food I needed to go from here to Independence. The food would have to include a side trip to summit Mt Whitney. I decided seven days of food would be enough.

The difficult task was trying to compact everything to see if it would fit in my bear canister. A bear canister is a container especially made for food storage that keeps bears from being able get to the food. I was able to get four days in the container. The rest I hope to eat early in the next section and hope there are no animal encounters.

I spent most of the day relaxing on the porch of the store. 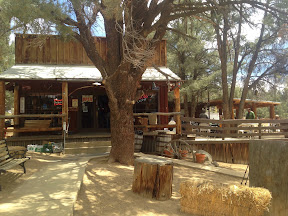 I sent myself a pair of new shoes so I wore them all day. I also made sure the bear canister fit into my pack.

Several other hikers arrived and left. It's fun to watch the new arrivals get the boxes that were mailed and open them. It was like opening Christmas presents. 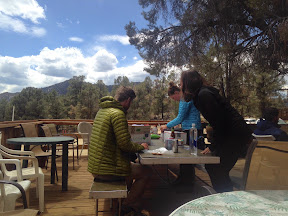 I was hoping that More Cowbell would arrive, but he may have ended up talking an extra day in Lake Isabella.

This place is another hiker vortex and I feel anxious about heading out tomorrow. A heavy pack has never been much fun to carry. Fortunately I have estimated lower daily miles for the next section so I shouldn't feel pressure to hurry.
Posted by Bob at 8:13 PM