When you have been out on the trail for several days, nothing lifts the spirits better than the thought of a day or two in town. I'm starting to get the "hiker hunger", which happens when you are burning many more calories than the trail food can provide. That juicy hamburger or cheesy Mexican dish sounds SO good.

Last night I fell asleep to the sounds of the wind turbines. They sound like a passing freight train without the clicking of the wheels. It becomes a background noise; somewhat soothing.

I awoke at 5:15 and was on the trail by 5:45. I sent a text message to More Cowbell and confirmed that he was just getting started on the trail too. He was camped about a mile behind me and we needed to keep in touch since we are sharing a room in town.

Today was a short day of hiking since I was within 8 miles of interstate highway 58, the road where we were going to hitch into Tehachapi. The sunrise over the wind farm was spectacular. 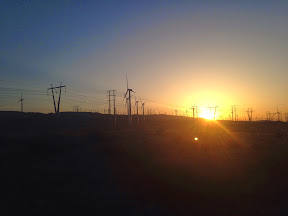 The trail passed through private land where cattle were grazing. 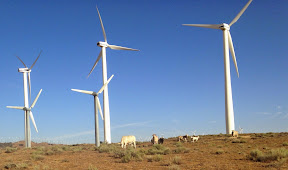 I got to the freeway just as More Cowbell caught up with me. I had taken a picture of a list of Trail Angels in Tehachapi, so I started calling to see if we could get a ride into town. Unfortunately, most of the numbers did not answer, and the one that did couldn't help.

To compound the problem, there was very little traffic entering the freeway and it was illegal to walk down the side of the road.

Just when I thought we would have a really long wait, a hiker (Tallahassee) drove up in a rented car and dropped of a group of hikers. He offered us a ride into town! We were dropped off right at the door of the Best Western! 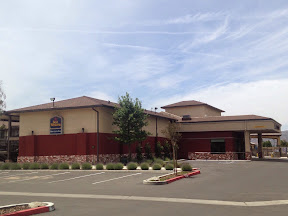 We rented a room for two nights. The first priority was to do laundry and take showers! It feels so good to be clean again.

Our next priority was FOOD! We walked down to the Apple Shed restaurant. 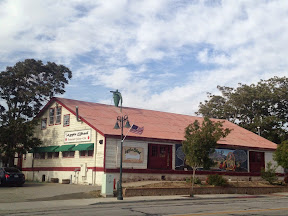 I had a juicy burger and potato wedges. We also got a list of local trail angels.

We read that the Kern Transit, the regional bus service, provides transportation back to the trail for a very reasonable price. In addition, the bus stop is just a couple blocks away! We decided that this is how we will return to the trail.

Tomorrow is a shopping day. I need 7 days of food to get to Kennedy Meadows. More Cowbell is thinking of taking 3 days of food and resupplying in Lake Isabella. That way he can reduce his pack weight. A problem in this section is that reliable water sources are far apart. Lots of water means a heavy pack. Seven days of food and lots of water makes for difficult days of hiking.

The idea of resupplying in Lake Isabella sounds attractive, but it is difficult to get to Lake Isabella and back. If I could hike with a group going there, I think I would go for it.

Tonight we are had dinner at Reds BBQ. 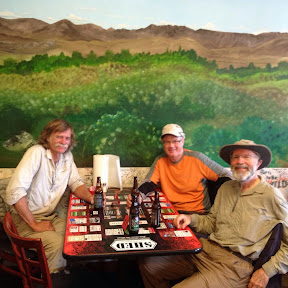 Several other hikers showed up including Lost & Found and Tallahassee. We all had a good meal along with a cold brew. On the way back we both ordered real milkshakes from the Burger Spot. 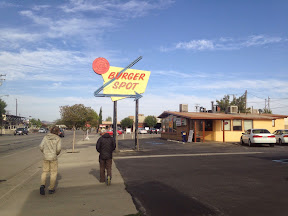 Tonight it will be nice sleeping in a cozy room and a soft bed. But I will definitely miss seeing the stars, satellites and shooting stars!
Posted by Bob at 8:35 PM