Casa de Luna was really fun! Such a great bunch of people!

I packed up and Terri took me and Fix It on her first run back to the trail at 6:45. 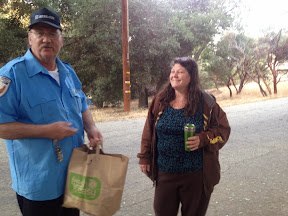 Before we left, there was one last photo of the folks that arrived yesterday. Terri always gets a smile from the group as she "moons" them just as the picture is taken. In this one, a young lady mooned her back! 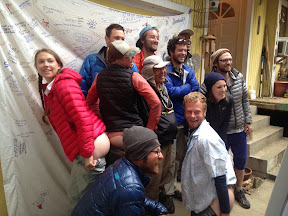 My hike today consisted mostly of road walking. The PCT has a large section that is closed due to the Powerhouse Fire several ago. At Casa de Luna there was a map of the route. 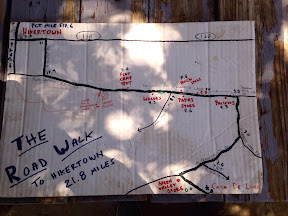 I chose the third option. I feel a bit guilty for skipping part of the trail, but I left carrying only 3 liters of water and was not sure of the next reliable source. Also, I had not planned go an extra day (this portion would have added another 20 miles), so I didn't have enough food.

The road passed by Elizabeth Lake, which was almost completely dried up and then by Lake Hughes.

Even on a road walk there are a interesting sights. There were pretty flowers, a farm with lots of sheep, even little ones. There was even a farm with a couple of ostriches. One farm had their dish receiver painted as a yellow "smiley face". There were several farms that had fancy thoroughbred horses. And there were farms growing grapes and peaches. 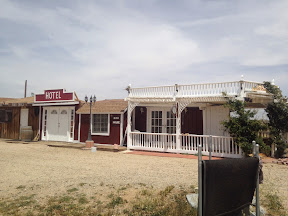 There are a number of buildings decorated as old-time western buildings. These are rented out to hikers if they want to stay overnight.

I cooked and ate my dinner there. As I was about to leave, Casey and Lightening Pad came in. They had just finished the portion of the trail that I skipped.

I left at 3 and headed towards the LA aqueduct. The first portion is open. 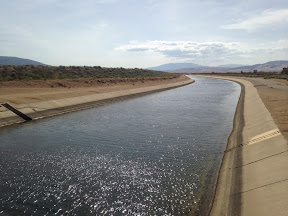 The trail crosses over and then follows a water pipeline for several miles. 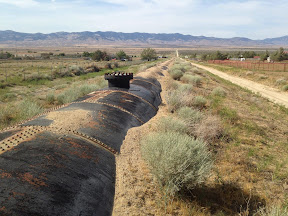 It finally follows a covered aqueduct which simply looks like a paved road. 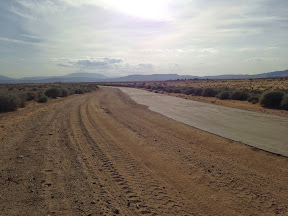 I am camped tonight in the desert near the aqueduct.