I slept soundly last night. I think it was the soothing sound of Clear Creek and a quiet campground that did it.

This morning, Deb made coffee while her husband Bob rekindled the campfire. I had very little phone service, so I checked every half-hour to see if my wife was going to try to join us.

After a short morning walk, Deb made a delicious breakfast of eggs, hash browns, bacon and toast. I even got seconds!

By 11, I decided to try to call my wife to see how she was feeling. Jet lag after a flight home from Spain can really sap your energy. Bob drove me to the store in the town of Rhododendron. I had good enough phone service to call home. As it turned out, my wife was doing laundry and still had to pay bills. We decided that it wouldn't make sense to try to drive for four hours just to be here a few hours. Instead, she will meet me either in Cascade Locks or Trout Lake.

I suggested to Deb that we leave for the trail this afternoon, rather than waiting until tomorrow morning. We decided to leave as soon as I could pack up!

Bob drove us to Timberline Lodge and Deb and I were on the trail by 1 PM. 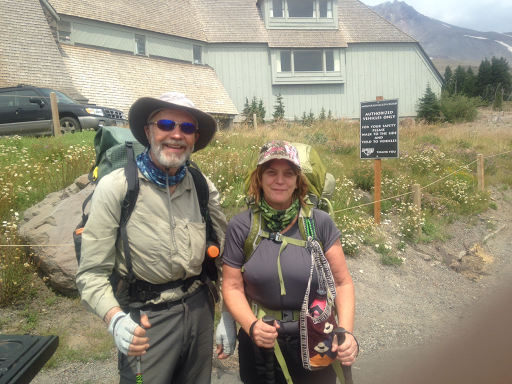 The first few miles were fairly easy as the trail dropped down to the Zigzag river. The river crossing was fairly easy. 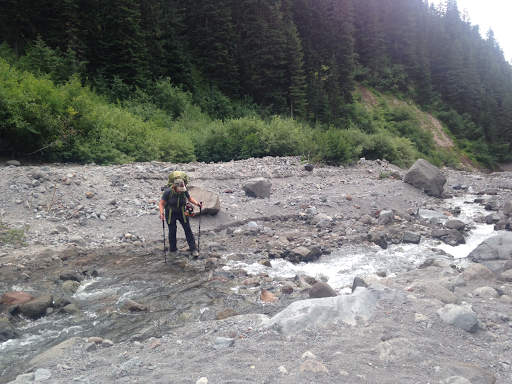 The climb up from the river was more of a challenge. I waited for Deb whenever I came to a trail junction. The trail then dropped again. At one point there was an amazing view of Mount Hood. 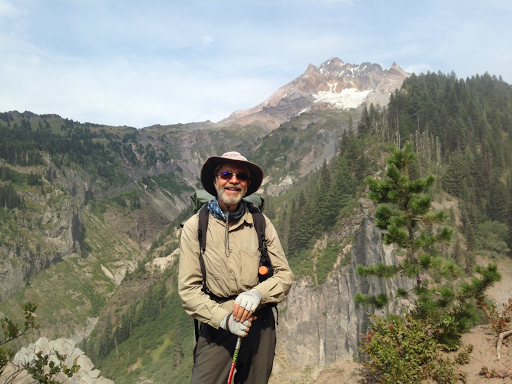 The trail then descended to the Sandy River. It was 5 PM and we found campsites by the river.

I had Chili Mac with Fritos, pepperoni and olive oil. I had two desserts: a moon pie and a muffin. Deb brought some red wine, so we each had a glass.

Deb forgot a belt for her pants, so she will try to use safety pins instead. Also, she was feeling a hot spot on one of her toes, so we taped it with Leukotape.