I thought I was done with the rain, but after I got into my tent last night at Mig Lake, it started drizzling and then raining. The clouds were thick and by morning the inside of my tent was damp. I bundled up my wet tent and damp sleeping bag with the intent of drying them later on.

I was on the trail by 5:45 and had eight miles to hike to get to Stevens Pass. There were two 1,000+ foot climbs to do, but they seemed to go quickly. The bushes were loaded with rain from last night, but I had my rain gear on. Only my feet got soaked.

The sun was burning off the clouds as I approached Stevens Pass. The trail passed under the ski lifts and I knew I was getting close to the pass. 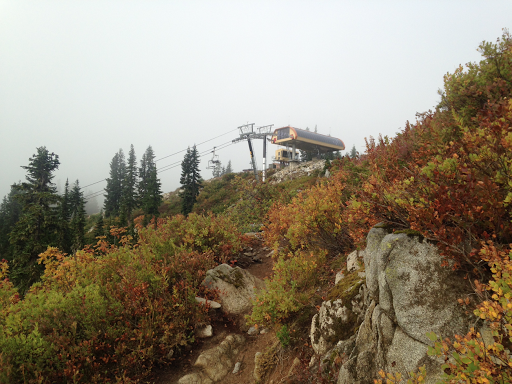 I have never played music while I hiked, basically because I like to listen to the sounds of the forest. Today, however, I thought I would try it as I approached the pass. I played a few of my favorite songs through the iPhone speakers. That way I could hear the forest and the music at the same time. The first song was "All of Me" by John Legend. I broke into tears. As I have said before, I easily get emotional while hiking, and this song spoke to my heart. As I came in sight of the pass, the song "Hallelujah" by The Canadian Tenors was playing. I lifted my arms over my head and yelled "hallelujah" as I completed this difficult section! 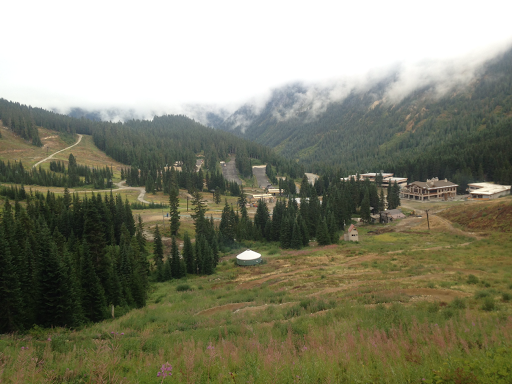 I walked across the highway to look at the trailhead heading north. There were several signs warning hikers that the trail was closed ahead due to the Blankenship fire.

I have been worrying for the last few days about what to do next. I could hike north from Stevens Pass, but would have to exit the trail midway. I could take the boat to Stehekin, and hike north from there, but that would mean a long drive and I am not sure the trail is open from that point on. Instead, I have decided to skip this section for now, and continue on from Rainy Pass. Perhaps I will come back sometime to finish this section, but for now my body and heart tell me to finish starting from Rainy Pass.

At 10:30 my wife arrived to take me home for a zero day. On the way out of the ski lodge, "Dr. Beaker" saw me and asked if she could get a ride to Hiker Heaven in Baring. I met her several times on the trail, but most recently at the town of Etna. Of course we gave her a ride and got to see the Dinsmore's Hiker Heaven.

My wife and I stopped in Seattle to celebrate my grandson's eighth birthday. I got to shower there, dried my tent and sleeping bag, and got my laundry done. We had a great time and had wonderful food.

I plan to rest tomorrow and gather supplies for my final push to the Canadian border. I feel sad that wildfires have disrupted my "fairytale" adventure, but I feel that I have made the right decision for me.