Waiting is difficult. I saw other hikers walking up the street here in Sierra City. They were headed back to the trail. Willy had to wait until 10 for the post office to open to pick up his passport. He needs it to apply for the entry into Canada permit.

We finally got to the trail at 10:45. The challenge was to climb 2,700 feet up to the Sierra Buttes. This was made more difficult because we had fully loaded packs with four days of food, extra water to go 12 miles to the first reliable source, and a warm day with temperatures in the 80's! What saved us was great trail design. The trail had lots of switch backs, but the slope was gradual. We were able to keep a steady pace and were at the top in two hours. 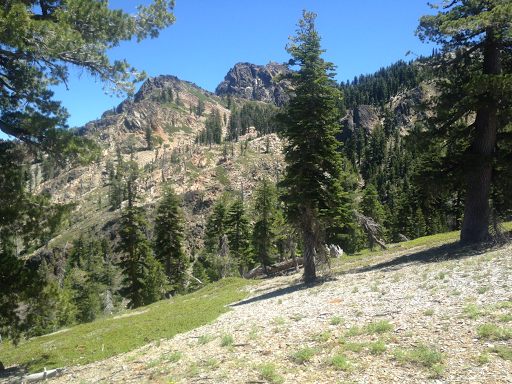 The Sierra Buttes lie in an area that was subject to gold mining during the California gold rush in the mid 1800's. We didn't see any mines, but there is a paved road leading to the Sierra Buttes trail head. We saw several day hikers. I also understand that there is a lookout at the top, but we didn't have time to make the detour.

The trail then followed the ridges for several miles and skirts the Plumas National Forest lakes basin. There are many lakes with clear blue water, all nestled in the forest. 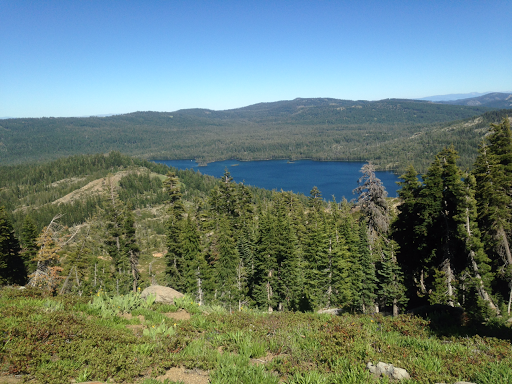 We finally decided to camp near Little Jamison spring, since water has been relatively scarce. I had Macaroni and Cheese for dinner. It was even better when I added Fritos!

Now for a bit of insight into the daily trials and tribulations for hikers. One problem hikers sometimes encounter are little gnats, colloquially known as face gnats. They seem to live near oak trees. The little buggers hover just in front of your face as you walk down the trail and will land on your face if you don't swat them away.

Sometimes there is a cloud of them. I found that if you are able to blow directly on one of them or are able to hit one with your hand, they will fly away. When they are really bad, I would hold my trekking pole in the middle and swing the handle end back and forth in front of my face like a windshield wiper. That kept them away.

One time when a cloud of them was pestering me, I walked really fast and then suddenly stopped. I laughed when the cloud kept going after my sudden stop! I have never been bitten by one but they sure are annoying!