I'm back on the trail again!

We left our cabin just after 6 AM. Here is our group: 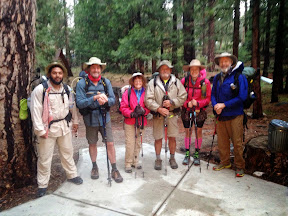 Many hikers get a ride to the trail that leads back to the Pacific Crest Trail. We decided, however, to walk to the trailhead. That involved a 4 1/2 mile walk up the Ernie Maxwell trail which brought us to the parking lot for the Devils Slide trail. 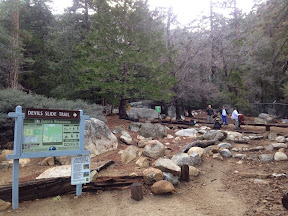 The Devils Slide trail switch backs up the mountain for 2 1/2 miles joining the PCT. So, before we even got back to the PCT, we had hiked 7 miles, all uphill.

The upper part of Mt San Jacinto was covered in snow as a result of last night's storm. 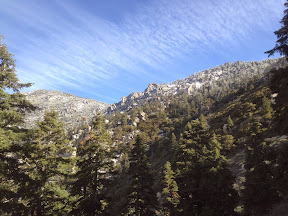 As we hiked up the Devils Slide trail, we eventually ran into snow. At the top, the entire trail was snow covered. 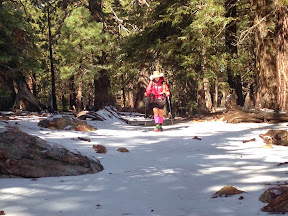 Fortunately the trail was easy to follow as it climbed up the mountain. The views were spectacular and the trees were covered in ice. 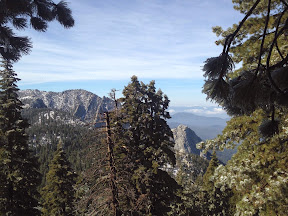 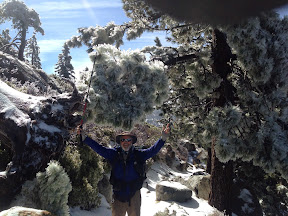 By mid morning, Mr T was doing the navigation. We wanted to follow the PCT, but there was an alternate trail that was 1 1/2 miles longer but took you very near the top of Mt San Jacinto. Unfortunately we ended up on the alternate trail and didn't discover our mistake until we were several miles up the trail.

The rest of our group took the PCT, so we were split up as we hiked today.

By 11 AM we reached a trail junction at 9,700 feet where there were a crowd of tourists all taking pictures and hiking toward the summit. They had taken a tram from the valley. 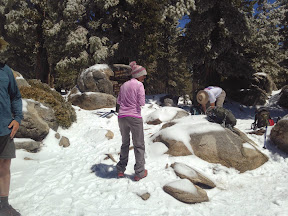 We headed up the trail and found that the slushy snow was melting in the trail, causing us to slip and slide in the icy water. Our shoes and pant legs were soaked.

The trail rose up and up and up, finally topping out at 10,550 feet. There was a short side trail to the summit, but my legs were so tired that I couldn't do it. It made me cry.

The trail back down to the PCT was really slippery, made more so by the tons of ice that was cascading from all of the trees as it warmed in the sun.

We finally made it back to the PCT and then walked through icy trails across Fuller Ridge. The trail then descends rapidly. Tomorrow I will be in the desert again. This is a view of the desert from the trail: 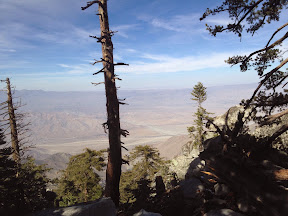 I hurried as fast as I could to try to catch up with the group, but ran out of steam at 6 PM.