White Pass to Chinook Pass via the Pacific Crest Trail

The Pacific Crest Trail crosses highway 123 at White Pass and runs north for almost 30 miles to Chinook Pass at highway 410. This section of trail is perfect for a two day overnight hike. My plan was to hike at least to the Mount Rainier National Park border, camp for the night, and then head out to Chinook Pass, where my wife was to meet me at noon on Saturday.

The weather is year, and this month (September), has been fabulous. And the third weekend in September was no exception.

Friday morning started out overcast, but the forecast was for clearing skies and warmer temperatures on the weekend. Unfortunately, I had to work for a few hours in the morning on Friday, so I didn't get home until 8:30 AM. I quickly changed clothes, packed up and headed to White Pass. As I neared the pass, I saw a huge patch of blue sky. When I arrived at 10:45 AM, there was nothing but sunny skies, perfect weather for hiking the PCT.

The chart below shows the elevation for my hike on Friday. I covered about 23.7 miles in 9 hours, hiking from the Clear Creek trail head at White Pass to Anderson Lake.
The first couple hours of the hike pass through deep forest and skirt by a number of lakes and ponds. Although there is steady elevation gain, the trail was relatively easy going and the miles passed quickly.
At about ten miles from White Pass, I arrived at the beautiful Snow Lake. This would be a great destination for a shorter two day camp out. Of course, I was on a mission to make it to the National Park border, so I didn't linger.

I noticed that the leaves are starting to turn colors as fall approaches.

From Snow Lake, the trail continues to descend. I finally stopped to get water at a lovely creek which had a wooden bridge. I find that it is important to stop every four to five hours, take off my shoes and socks, and let my feet cool down. It does wonders.
From the footbridge, I headed on down the trail, which drops continually as it approaches the Bumping River. On the way down I could hear the stream that I had just crossed as dropped through a narrow canyon and a series of water falls.

As I was walking down the trail, trying to pay attention to the roots and rocks, all of a sudden behind me I hear the pounding of hoofs. They were approaching very quickly and I reacted by hunching down because I thought something was going to run over me. However, when I turned around, there was NOTHING there! I don't know if I had surprised an elk, or if one had come running out on the trail, or what.

I can just see the news headline now, "Unwary PCT hiker run over by a rampaging bull elk."

Needless to say, my heart was racing and I was paying much more attention to the woods around me as I approached the Bumping River.

The river crossing was fairly easy, as there were logs strategically placed between boulders in the river. However, during the snow melt, this might be a hazardous crossing.

The trail rises continually from the river. With legs getting tired, I trudged on up the trail. I passed a young lady who was RUNNING the trail, and another group of three women who were headed toward the river.

About halfway up the mountain, I saw a huge bull elk in the field. I only noticed him because it must be mating season and he was letting out a high-pitched bugle. He quickly ran off once he saw that I was watching.

I finally reached the crest of the mountain and noticed that the sun was starting to set. I remembered that there was a lake and campground "just up the trail", so I scurried along, figuring that I would get there in time to make camp and have dinner before dark.

What I forgot to do was look at my map.
The lake was still about six miles away.
As the sun dropped lower, I walked faster.

The sun won the race.

As it was getting dark, and having just passed the American Lake trail junction, I met a group of teenagers coming up the trail. They wondered if I had seen a lake nearby. I said, "Um, no I hadn't, but there was a trial to American Lake just around the corner." What I didn't mention was that it was still over a mile to their destination, and they didn't appear to be equipped for hiking in the dark. In fact, most of them didn't appear to be carrying any camping gear at all! I hope they made it.

Within minutes, I put on my headlamp and again trudged on up the trail, kicking myself for not having stopped sooner at a campsite. At 8:30 I finally stumbled into camp. I have never felt so tired in my life. I had just put in 23.7 miles on the PCT, after having walked another eight miles at work.

I had just completed my first-ever 30 mile day!

There were two other campers in the campground, but I quickly found a flat spot and set up my tent. I was too tired to eat dinner, and waited patiently until my SPOT device finished sending it's signal.

As I was just drifting off to sleep, I heard this loud bugling elk in the field next to the lake. Every hour or so, it would belt out another scream. Don't they ever sleep? I sure didn't!

Click to hear a sample of an Elk bugle.


In the morning, I waited until the sun was up before breaking camp. The tent collected a bit of condensation during the night, mostly because there was very little breeze and not enough air movement to evaporate the moisture.

Here is my camp.
The other campers were packing up as I was eating my breakfast sandwich (my sandwich that I couldn't eat for dinner last night). One fellow came over and looked at my tent, asking if it was a ZPacks? I said that it was and he was interested in how the bathtub portion was attached.

I found out that he had walked much of the PCT last year!
His trail name was "Patches", and he said I should check out his Facebook page, "Patches Pal". 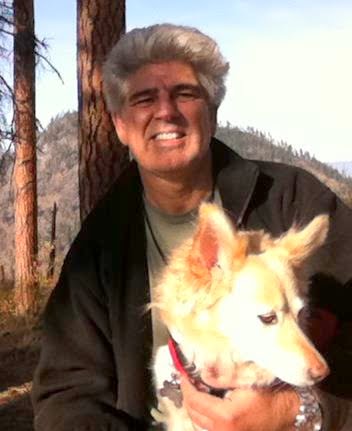 His pack base weight was nine pounds! He had a light weight tent, air mattress, and Gossamer gear pack. He never filtered his water and never got sick. He ate mashed potatoes for most of his dinners and didn't send food to himself on the trail. He looked forward to his "town" days, and always was sure to get a good dinner and breakfast before heading back onto the trail. He also suggested that I take it easy the first week or so of my through hike. He said many people over do it, try to go too far, and end up with blisters or worse.

Gee, everyone seems to have a different way supporting themselves on the trail.
Mashed potatoes... yum!

He was hiking north, planning to finish the PCT this year.
Good luck, Patches! Thank you for the tips!

The walk from Anderson Lake to Chinook pass was just over five miles, so I made it a leisurely hike and arrived just before 11.

At the parking lot, two ladies were doing trail magic for the PCT through hikers.

They had a cooler with pop and beer, and had pizza. They put out signs on the trail, and within a few minutes there were three hikers sitting around enjoying the food.

The first one to arrive was called "The Ambassador", a name given to him because he has the gift of gab and finds it easy to get hitches to and from the trail.

He said that he saw more snow in the Goat Rocks then he did in the Sierras. That is amazing to me. He was also wearing a skirt, which I didn't notice because they looked more like shorts. But, he unfastened them, and it was indeed a skirt. He just loved it! He helped himself to a beer and a slice of pizza, and signed the guest register.

Soon two other through hikers joined him. The first one had walked the Appalachian Trail last year, and said that the PCT was much easier than the AT. He was also the one who asked the trail angels if she had any "weed". She said no.

The other hiker was a pretty young woman from the east coast. She was wearing a pretty sun dress, and looked like she was just out on a sunny jaunt through the forest. Her trail name was "Handstand", given to her on her first day of hiking at Lake Morena. She got up in the morning and was so cold she started doing handstands to keep warm. Another hiker yelled out, "Hey, your name is handstand." The name stuck.

She asked me my name, and I told her I didn't have one yet, but I call myself "Bobaroo".Who knows if that is what I'll be called as I hike the trail next year? I fear that someone will see my pack askew on my back and I'll get the name "hunchback" or "lopsided". It would just be my luck!

Valorie arrived at noon, and dropped me back at my truck at White Pass.

What did I learn on this adventure?

1) I carried too much food again. My lunch was eaten on the trail (macadamia nuts), and I ended up eating my dinner sandwich for breakfast. So, in retrospect, I wouldn't have needed the dinner and breakfast that I brought, and none of the other lunch items. In fact, since I didn't heat any water, I would not have needed my stove either.

3) I can walk for over 30 miles in a day. However, I really felt it in my feet and legs. I was so tired all I wanted to do was get in my sleeping bag and rest.

4) If I manage my water better, I don't need to carry so much. Water is heavy. Patches told me that he carried two 32-ounce bottles during his PCT hike, and that was plenty. In the desert, he simply filled up at every water source and carried an extra two-liter bladder.

5) Every PCT hiker works out a plan and routine that fits their style. Patches didn't send food to himself, but bought along the way. I wonder how he did the Sierras? Also, this is the second through hiker who mainly ate mashed potatoes for dinner. Patches added beef jerky and gravy to change up his menu.

6) Providing Trail Magic for hikers sounds like it would be really fun. The folks doing it at Chinook Pass had been doing it for over ten years. They hear stories from the trail, and meet awesome people.