Almost six months ago, the "walking buddies" decided that we would do a weekend backpacking trip in the summer. I chose the weekend of July 12 and 13th. My suggestion was to hike up the Deep Creek trail to the ridge and then pick a camping spot somewhere near Noble Knob.

As the weekend approached, I got a text message from Patti saying that she had fallen and tweaked her hip. She would NOT be going on our planned hike!
I was saddened, but glad that Patti was looking out for herself.

I sent a text message to Debbie, wanting to confirm that she would still be going.
She was. In addition, I got another bright idea.

Debbie arrived at my house at 2:30 and we arrived at the Greenwater River trail head at 3:25.
The day was sunny and warm.
Of course the trail up the river crosses five times on log bridges. It was beautiful.
As we neared Lost Lake, there were fields on beautiful wild flowers. It was breathtaking.
When we arrived at the lake, we were the only ones there!
We picked a prime camp site right on the lake shore and quickly made camp.
The evening was perfect. There were hardly any mosquitoes or bugs. This was our view... amazing!
This was my view from my tent. It doesn't get any better than this.
On Saturday morning, we both woke up early and were on the trail by 6:30 AM.
I had warned Debbie that the first two miles were going to be difficult.
The trail gained over 1600 feet in less than two miles.

Here is a map of our loop hike: 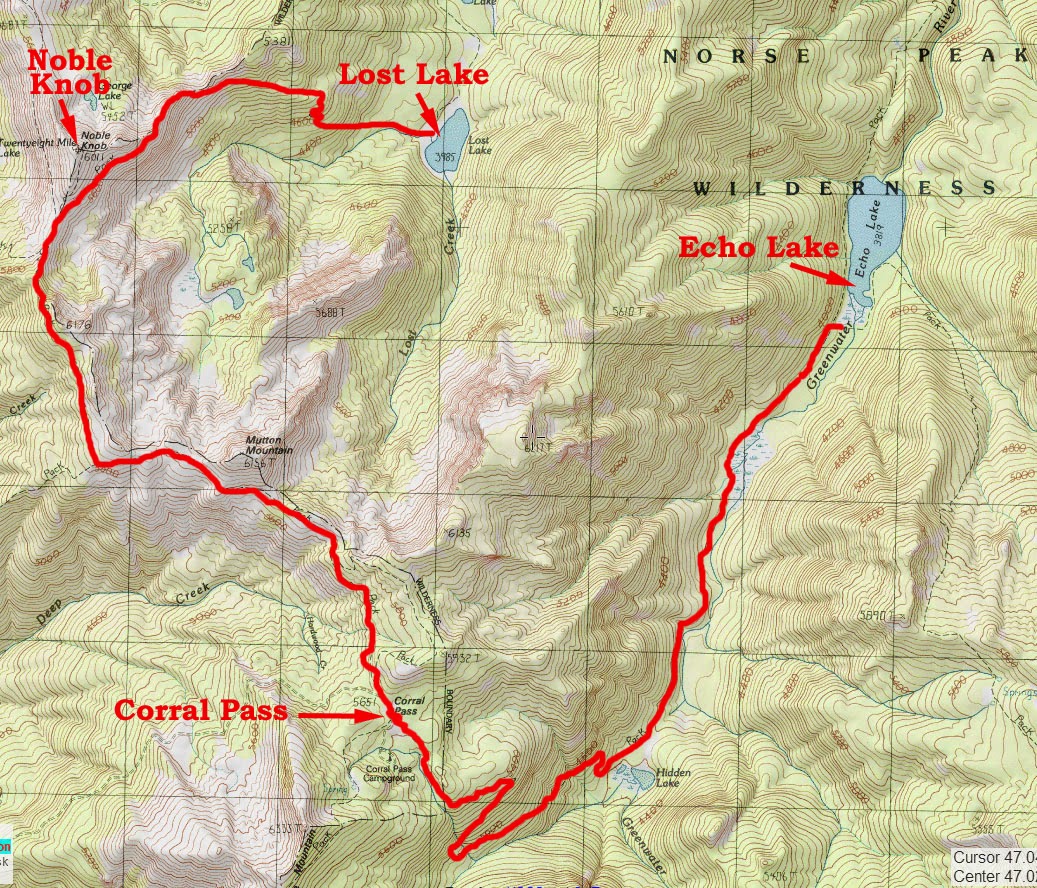 On the way up, we surprised two elk. They quickly disappeared into the forest.
Since Debbie knew that this part of the trail was going to be very difficult, she told me to "hike my own hike", so I hiked on ahead, hoping that Debbie would have the energy to make it to the top.

The trail was not easy, but it soon broke out into sub-alpine and alpine forests.
The views were amazing.
Noble Knob was right above, with fields of wild flowers blooming everywhere.
I was in heaven!


I told Debbie that I would wait for her when I got to another trail junction.
I sat down my pack.
A raven soared overhead, catching the air currents.
There were humming birds and butterflies.

And, finally, Debbie. She made it!
I was so relieved.

AND, the best part of all?
She found her trail name!
She calls herself, "Turtle"!

As we crossed over the ridge, the impressive Mount Rainier stood out in all her glory.
As we neared Corral Pass, Debbie realized that we had cell phone service again.
She called her husband, and I sent a text message to my wife, Valorie.

As we walked down the trail towards Corral Pass, we met three young men who were riding cross-country bikes down the trail and were headed to the Ranger Creek trail. As it happens, we met them right at the point where the Deep Creek trail joins with the Dalles Ridge Trail.

Shortly after that, we met three men who were headed up the trail, carrying what I first thought were fishing nets. Instead, they were out to hunt for butterflies!

From Corral Pass, we headed down the Greenwater River Trail.
By this time, it was getting hot, and we were so glad that we were headed DOWN the trail, not trying to climb it. We passed several streams along the way.
The trail was made much more difficult by several huge fallen trees that had not been cleared from the trail.
At these places, we either had to climb over the logs, squeeze under them, go around them, or in some cases, crawl on the ground under them. It was very tiring and made harder by a full back pack.

By mid afternoon we arrived at Echo Lake.
On my prior hike, I noticed a wonderful camp site right along the Greenwater River before it enters the lake.
We made camp there.

We had a good evening and shared a good meal.
I had brought some wine, which we enjoyed by a small camp fire.

On Sunday morning, we arose early and were on the trail shortly after 6 AM.
The sun is so beautiful as it streams through the forest.
These were pretty pink flowers (?) along the trail.

The trail down from Echo Lake passes several waterfalls.


Debbie completes her hike as she arrives at the Greenwater River trail head. It was 9:30 AM.
We had traveled 36.8 miles!
What did I learn?


This was one of the most memorable hikes I have ever taken.
The weather was unbeatable, with blue skies and temperatures in the 70s.
The camp sites were perfect... close to water, great views, and isolated.
There were very few bugs...of course, there are always bugs.
My hiking partner now has a trail name, and I love it! The "turtle" was victorious!